Sandia National Laboratories in Albuquerque New Mexico has a machine that can “create conditions found nowhere else on earth”. It is “the most powerful and efficient laboratory radiation source. It uses high magnetic fields associated with high electrical currents to product high temperatures, high pressures, and powerful x-rays for research in high energy density science.”

We learned about this machine from our customer Steve Jacobsen, a Professor in the Department of Earth and Planetary Science at Northwestern University. He is one of the researchers at Northwestern involved in Mineral Physics and High Presssure Science.

Dr. Jacobsen is currently using his Deltech vertical tube furnace system to prepare samples which will be placed in the Z-machine in December 2021. My guess is this is a lot like getting to send an experimental setup you designed up to the space station. It’s a pretty big deal and I asked him to tell us how this all came about. Here is his description of the project:

“About 1800 miles beneath our feet, the deepest part of the planet’s solid, rocky mantle meets the liquid-iron outer core. Whereas most magmas are generated in the uppermost mantle, some unusual magmas, such as those found in the Hawaiian islands, or Iceland, known as ocean islands basalts, carry geochemical signatures of the primordial Earth and may derive from the core-mantle boundary. But why? To explore this question requires geophysical experiments done at extreme conditions. One facility capable of achieving the pressure-temperature conditions found in planetary interiors can be found at Sandia National Laboratories in Albuquerque, New Mexico, on the Z-machine.

Built for National security science and fusion research by the Department of Energy, occasionally academic scientists get a chance to use the massive Z-machine through collaborative research with National Laboratory scientists. Z is a pulsed-power machine that can “whack” samples under study by delivering 26 million amps per shot, or nearly 1000 times the electricity of a lightning bolt.

I (Prof. Steve Jacobsen) and graduate student Hannah Bausch at Northwestern University in Evanston, IL, are collaborating with a team at Sandia to study an iron-rich magnesium oxide known as ferropericlase, or (Mg,Fe)O. This oxide might be responsible for some of the unusual structures observed on the core-mantle boundary, imaged using seismic waves. Deep magmas feeding the ocean island basalts may derive from these structures where the core interacts with the mantle. Shots on the Z machine will probe the thermodynamic properties of (Mg,Fe)O at conditions of the Earth’s core-mantle boundary.

To grow the unusual iron oxide, we are using our Deltech vertical tube wfurnace with CO/CO2 mixtures to hone in on the just the right proportion of iron and oxygen to reproduce oxides found in the deepest Earth. These iron oxides are much more reduced than the rust on a car, which is the stable form of iron oxide at the surface. Rapid quenching from 1400C through the vertical tube preserves the ferropericlase without oxidation. Our group’s first shot on the Z machine is scheduled to take place in early December, 2021.”

We hope their first experiment brings exciting results and opportunities for more research! 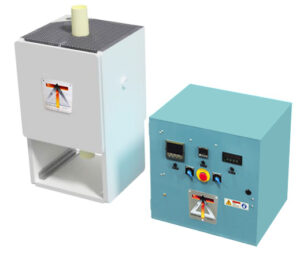 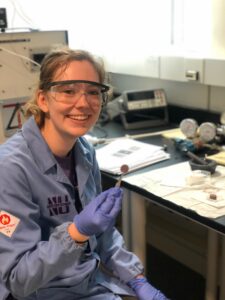